SPOTLIGHT MONDAYS! Spotlight on a special piece of art for your collecting pleasure. Click anywhere on the art below to view details. 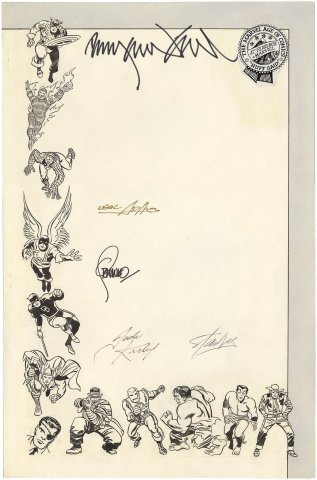 This may be one the greatest Kirby pieces that I will ever offer. That’s because of how unique it is in that it features so many Marvel heroes and it truly is one of a kind. The Merry Marvel Marching Society was created by Stan Lee in 1964 for the Marvel Fandom that was quickly catching on to the comics. For $1 you would join the club and get a membership card, a sticker, a note pad, a button and other items. Later on they included this letterhead featuring most of the Marvel heroes and they had Jack Kirby draw the characters.

So when you mention one of a kind Kirby this is it. How often have we seen him draw all these characters, including Spider-Man who he rarely drew, all on one page. The provenance of the piece is that it came straight from the Kirby’s to the greatest Kirby collector we have ever known, Tony Christopher. This was one of the last items that Tony released from his famous collection and came straight to my collection. Tony went out and got signatures from some of the greats at Marvel including Jack Kirby, Stan Lee, Steranko, Neal Adams, and Barry Smith. A truly priceless piece.

Submitting a purchase request does not guarantee the item, as other may have put in the request first. You will be contacted only if your request came in first. Contact will be made within 24-48 hours. Trade and time payments available.

Add to cart
VIEW CART »
Get a closer look!

Get the latest updates from Nostalgic Investments! Sign up today!